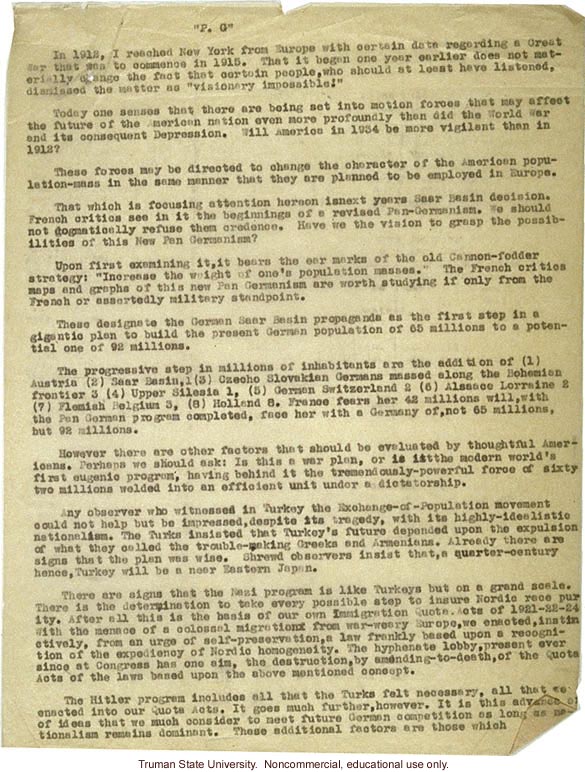 "P.G." In 1912, I reached New York from Europe with certain data regarding a Great War that was to commence in 1915. That it began one year earlier does not materially change the fact that certain people, who should at least have listened, dismissed the matter as "visionary impossible!" Today one senses that there are being set into motion forces that may affect the future of the American nation even more profoundly than did the World War and its consequent Depression. Will America in 1934 be more vigilant than in 1912? These forces may be directed to change the character of the American population-mass in the same manner that they are planned to be in Europe. That which is focusing attention hereon is next years Saer[sp?] Basin decision. French critics see in it the beginnings of a revised Pan-Germanism. We should not dogmatically refuse them credence. Have we the vision to grasp the possibilities of this new Pan Germanism? Upon first examining it, it bears the ear marks of the old Cannon-fodder strategy: "Increase the weight of one's population masses." The French critics maps and graphs of this new Pan Germanism are worth studying if only from the French or assertedly military standpoint. These designate the German Saer Basin as the first step in a gigantic plan to build the present German population of 65 millions to a potential one of 92 millions. The progressive step in millions of inhabitants are the addition of (1) Austria (2) Saer Basin,1 (3) Czecho Slovakian Germans massed along the Bohemian frontier 3 (4) Upper Silesia 1, (5) German Switzerland 2 (6) Alsace Lorraine 2 (7) Flemish Belgium 3, (8) Holland 8. France fears her 42 millions will, with the Pan German program completed, face her with a Germany of, not 65 millions, but 92 millions. However there are other factors that should be evaluated by thoughtful Americans. Perhaps we should ask: Is this a war plan, or is it the modern world's first eugenic program, having behind it the tremendously-powerful force of sixty-two millions welded into an efficient unit under a dictatorship. Any observer who witnessed in Turkey the Exchange-of-Population movement could not help but be impressed, despite its tragedy, with its highly-idealistic nationalism. The Turks insisted that Turkey's future depended upon the expulsion of what they called the trouble-making Greeks and Armenians. Already there are signs that the plan was wise. Shrewd observers insist that, a quarter-century hence, Turkey will be a near eastern Japan. There are signs that the Nazi program is like Turkeys[sic] but on a grand scale. There is the determination to take every possible step to insure Nordic race purity. After all this is the basis of our own Immigration Quota Acts of 1921-22-24. With the menace of a colossal migration from war-weary Europe, we enacted, instinctively, from an urge of self-preservation, a law frankly based upon a recognition of the expediency of Nordic homogeneity. The hyphenate lobby, present ever since at Congress has one aim, the destruction, by amending to death, of the Quota Acts of the laws based upon the above mentioned concept. The Hitler program includes all that the Turks felt necessary, all that is enacted into our Quota Acts. It goes much further, however. It is this advance of ideas that we much consider to meet future German competition as long as nationalism remains dominant. These additional factors are those which
Copyright 1999-2004: Cold Spring Harbor Laboratory; American Philosophical Society; Truman State University; Rockefeller Archive Center/Rockefeller University; University of Albany, State University of New York; National Park Service, Statue of Liberty National Monument; University College, London; International Center of Photography; Archiv zur Geschichte der Max-Planck-Gesellschaft, Berlin-Dahlem; and Special Collections, University of Tennessee, Knoxville.
The images and text in this Archive are solely for educational and scholarly uses. The materials may be used in digital or print form in reports, research, and other projects that are not offered for sale. Materials in this archive may not be used in digital or print form by organizations or commercial concerns, except with express permission.