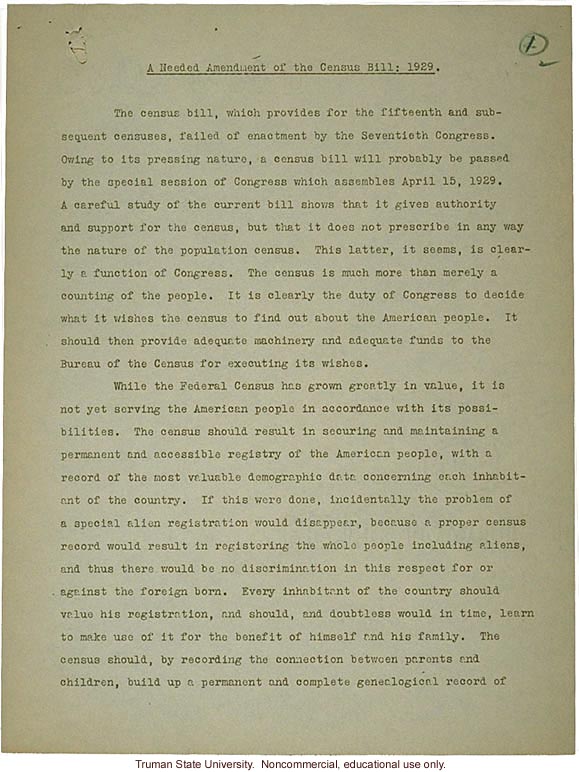 A Needed Amendment of the Census Bill, 1929. The census bill, which provides for the fifteenth and subsequent censuses, failed of enactment by the Seventieth Congress. Owing to its pressing nature, a census bill will probably be passed by the special session of Congress which assembles April 15, 1929. A careful study of the current bill shows that it gives authority and support for the census, but that it does not prescribe in any way the nature of the population census. The latter, it seems, is clearly a function of Congress. The census is much more than merely a counting of the people. It is clearly the duty of Congress to decide what it wishes the census to find out about the American people. It should then provide adequate machinery and adequate funds to the Bureau of the Census for executing its wishes. While the Federal Census has grown greatly in value, it is not yet serving the American people in accordance with its possibilities. The census should result in securing and maintaining a permanent and accessible registry of the American people, with a record of the most valuable demographic data concerning each inhabitant of the country. If this were done, incidentally the problem of a special alien registration would disappear, because a proper census record would result in registering the whole people including aliens, and thus there would be no discrimination in this respect for or against the foreign born. Every inhabitant of the country should value his registration, and should, and doubtless would in time, learn to make use of it for the benefit of himself and his family. The census should, by recording the connection between parents and children, build up a permanent and complete genealogical record of
Copyright 1999-2004: Cold Spring Harbor Laboratory; American Philosophical Society; Truman State University; Rockefeller Archive Center/Rockefeller University; University of Albany, State University of New York; National Park Service, Statue of Liberty National Monument; University College, London; International Center of Photography; Archiv zur Geschichte der Max-Planck-Gesellschaft, Berlin-Dahlem; and Special Collections, University of Tennessee, Knoxville.
The images and text in this Archive are solely for educational and scholarly uses. The materials may be used in digital or print form in reports, research, and other projects that are not offered for sale. Materials in this archive may not be used in digital or print form by organizations or commercial concerns, except with express permission.