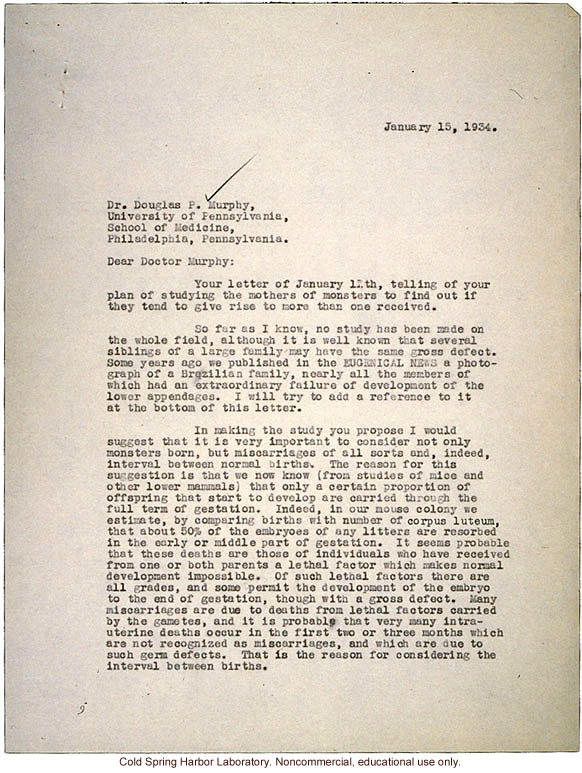 January 15, 1934. Dr. Douglas P. Murphy, University of Pennsylvania, School of Medicine, Philadelphia, Pennsylvania. Dear Dr. Murphy: Your letter of January 11th, telling of your plan of studying the mothers of monsters to find out if they tend to give rise to more than one received. So far as I know it, no study has been made on the whole field, although it is well known that several siblings of a large family may have the same gross defect. Some years ago we published in the EUGENICAL NEWS a photograph of a Brazilian family, nearly all the members of which had an extraordinary failure of development of the lower appendages. I will try to add a reference to it at the bottom of this letter. In making the study you propose I would suggest that it is very important to consider not only monsters born, but miscarriages of all sorts and, indeed, interval between normal births. The reason for this suggestion is that we now know (from studies of mice and other lower mammals) that only a certain proportion of offspring that start to develop are carried through the full term of gestation. Indeed, in our mouse colony we estimate, by comparing births with number of corpus luteum, that about 50% of the embryos of any litters are resorbed in the early or middle part of gestation. It seems probable that these deaths are those of individuals who have received from one or both parents a lethal factor which makes normal development impossible. Of such lethal factors there are all grades, and some permit the development of the embryo to the end of gestation, though with a gross defect. Many miscarriages are due to deaths from lethal factors carried by the gametes, and it is probable that very many intrauterine deaths occur in the first two or three months which are not recognized as miscarriages, and which are due to such germ defects. That is the reason for considering the interval between births. [end]
Copyright 1999-2004: Cold Spring Harbor Laboratory; American Philosophical Society; Truman State University; Rockefeller Archive Center/Rockefeller University; University of Albany, State University of New York; National Park Service, Statue of Liberty National Monument; University College, London; International Center of Photography; Archiv zur Geschichte der Max-Planck-Gesellschaft, Berlin-Dahlem; and Special Collections, University of Tennessee, Knoxville.
The images and text in this Archive are solely for educational and scholarly uses. The materials may be used in digital or print form in reports, research, and other projects that are not offered for sale. Materials in this archive may not be used in digital or print form by organizations or commercial concerns, except with express permission.