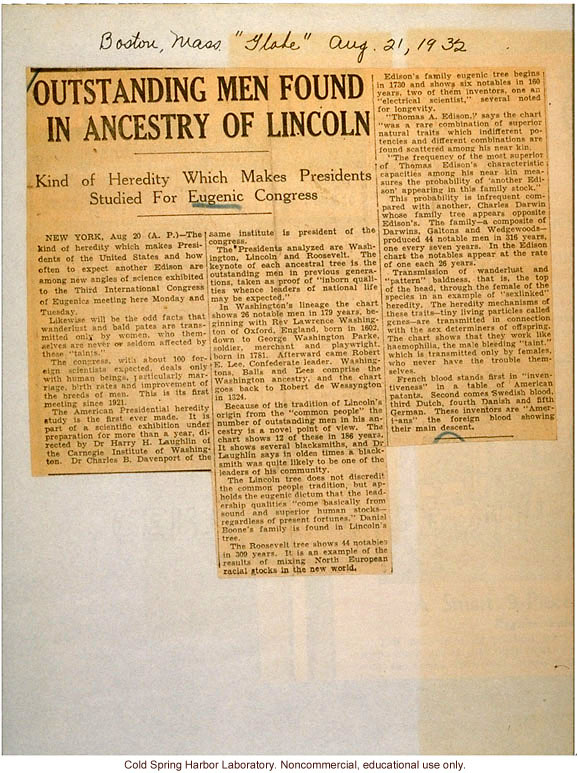 Boston, Mass. "Globe" Aug. 21, 1932 Outstanding Men Found in Ancestry of Lincoln [centered score] Kind of Heredity Which Makes Presidents Studied for Eugenic Congress [centered score] New York, Aug 20 (A. P.) - The kind of heredity which makes Presidents of the United States and how often to expect another Edison are among new angles of science exhibited to the Third International Congress of Eugenics meeting here Monday and Tuesday. Likewise will be the odd facts that wanderlust and bald pates are transmitted only by women, who themselves are never or seldom afflicted by these "taints." The congress, with about 100 foreign scientists expected, deals only with human beings, particularly marriage, birth rates and improvement of the breeds of men. This is its first meeting since 1921. The American Presidential study is the first ever made. It is part of a scientific exhibition under preparation for more than a year, directed by Dr. Harry H. Laughlin of the Carnegie Institute of Washington. Dr. Charles B. Davenport of the same institute is president of the congress. The Presidents analyzed were Washington, Lincoln, and Roosevelt. The keynote of each ancestral tree is the outstanding men in previous generations, taken as proof of "inborn qualities whence leaders of national life may be expected." In Washington's lineage the chart shows 26 notable men in 179 years, beginning with Rev Laurence Washington of Oxford, England, born in 1602, down to George Washington Parke, soldier, merchant and playwright, born in 1781. Afterward came Robert E. Lee, Confederate leader. Washingtons, Balls, and Lees comprise the Washington ancestry, and the chart goes back to Robert de Wessyngton in 1324. Because of the tradition of Lincoln's origin from the "common people" the number of outstanding men in his ancestry is a novel point of view. The chart shows 12 of these in 186 years. It shows several blacksmiths, and Dr. Laughlin says that in olden times a blacksmith was likely to be one of the leaders in his community. The Lincoln tree does not discredit the common people tradition, but uphold the eugenic dictum that the leadership qualities "come basically from sound and superior human stocks - regardless of present fortunes." Daniel Boone's family is found in Lincoln's tree. The Roosevelt tree shows 44 notables in 309 years. It is an example of the results of mixing North European racial stocks in the new world. Edison's family eugenic tree begins in 1730 and shows six notables in 160 years, two of them inventors, one an "electrical scientist," several noted for longevity. "Thomas A. Edison," says the chart, "was a rare combination of superior natural traits which indifferent potencies and different combinations are found scattered among his near kin. "The frequency of the most superior of Thomas Edison's characteristic capacities among his near kin measures the probability of 'another Edison' appearing in his family stock." This probability is infrequent compared with another, Charles Darwin whose family tree appears opposite Edison's. The family - a composite of Darwins, Galtons and Wedgewoods - produced 44 notable men in 316 years, one in every seven years. In the Edison chart the notables appear at the rate of one every 26 years. Transmission of wanderlust and "pattern" baldness, that is, the top of the head, through the female of the species, in[sic] an example of "sexlinked" heredity. The hereditary mechanisms of these traits - tiny living particles called genes - are transmitted in connection with the sex determiners of offspring. The chart shows that they work like haemophilia, the male bleeding "taint," which is transmitted only by females, who never have the trouble themselves. French blood stands first in "inventiveness" in a table of American patents. Second comes Swedish blood, third Dutch, fourth Danish and fifth German. These inventors are "Americans" the foreign blood showing in their main descent. [centered score] [end]
Copyright 1999-2004: Cold Spring Harbor Laboratory; American Philosophical Society; Truman State University; Rockefeller Archive Center/Rockefeller University; University of Albany, State University of New York; National Park Service, Statue of Liberty National Monument; University College, London; International Center of Photography; Archiv zur Geschichte der Max-Planck-Gesellschaft, Berlin-Dahlem; and Special Collections, University of Tennessee, Knoxville.
The images and text in this Archive are solely for educational and scholarly uses. The materials may be used in digital or print form in reports, research, and other projects that are not offered for sale. Materials in this archive may not be used in digital or print form by organizations or commercial concerns, except with express permission.