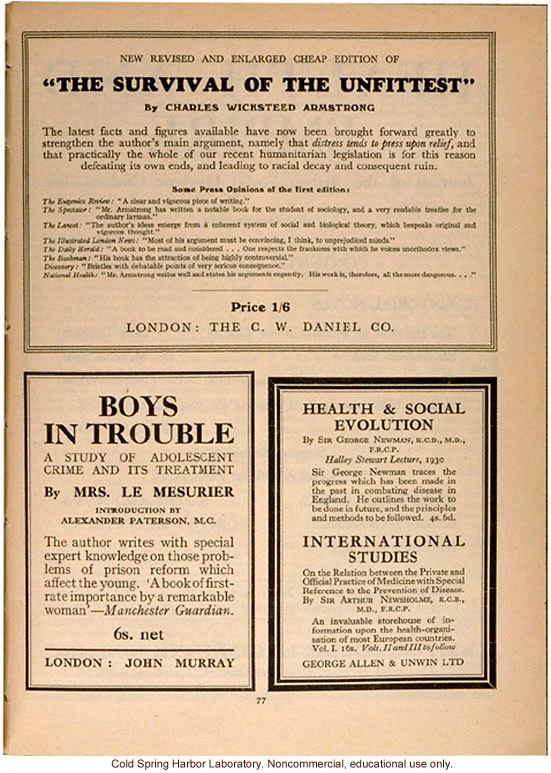 [boxed text, top] New Revised and Enlarged Cheap Edition of "The Survival of the Unfittest" By Charles Wicksteed Armstrong The latest facts and figures available have now been brought forward greatly to strengthen the author's main argument, namely that [italics]distress tends to press upon relief[end italics], and that practically the whole of our recent humanitarian legislation is for this reason defeating its own ends, and leading to racial decay and consequent ruin. Some Press Opinions of the first edition: The Eugenics Review: "A clear and vigorous piece of writing." The Spectator: "Mr. Armstrong has written a notable book for the student of sociology, and a very readable treatise for the ordinary layman." The Lancet: "The author's ideas emerge from a coherent system of social and biological theory, which bespeaks original and vigorous thought." The Illustrated London News: "Most of his argument must be convincing, I think, to unprejudiced minds." The Daily Herald: "A book to be read and considered . . .One respects the frankness with which he voices unorthodox views." The Bookman: "His book has the attraction of being highly controversial." Discovery: "Bristles with debatable points of very serious consequence." National Health: "Mr. Armstrong writes well and states his arguments cogently. His work is, therefore, all the more dangerous. . . ." [centered score] Price 1/6 London: The C. W. Daniel Co. [boxed text; lower left quarter page] Boys in Trouble A Study of Adolescent Crime and Its Treatment By Mrs. Le Mesurier Introduction by Alexander Patterson, M.C. The author writes with special expert knowledge on those problems of prison reform which affect the young. 'A book of first-rate importance by a remarkable woman' - Manchester Guardian. 6s. net [score] London: John Murray [boxed text; lower right quarter page] Health & Social Evolution By Sir George Newman, K.C.B., M.D., F.R.C.P. Halley Stewart Lecture, 1930 Sir George Newman traces the progress which has been made in the past in combating disease in England. He outlines the work to be done in future, and the principles and methods to be followed. 4s. 6d. International Studies On the Relation between the Private and Official Practice of Medicine with Special Reference to the Prevention of Disease. By Sir Arthur Newsholme, K.C.B., M.D., F.R.C.P. An invaluable storehouse of information upon the health-organisation of most European countries. Vol. I. 16s. [italics]Vols. II and III to follow[end italics] George Allen & Unwin Ltd 77 [end]
Copyright 1999-2004: Cold Spring Harbor Laboratory; American Philosophical Society; Truman State University; Rockefeller Archive Center/Rockefeller University; University of Albany, State University of New York; National Park Service, Statue of Liberty National Monument; University College, London; International Center of Photography; Archiv zur Geschichte der Max-Planck-Gesellschaft, Berlin-Dahlem; and Special Collections, University of Tennessee, Knoxville.
The images and text in this Archive are solely for educational and scholarly uses. The materials may be used in digital or print form in reports, research, and other projects that are not offered for sale. Materials in this archive may not be used in digital or print form by organizations or commercial concerns, except with express permission.