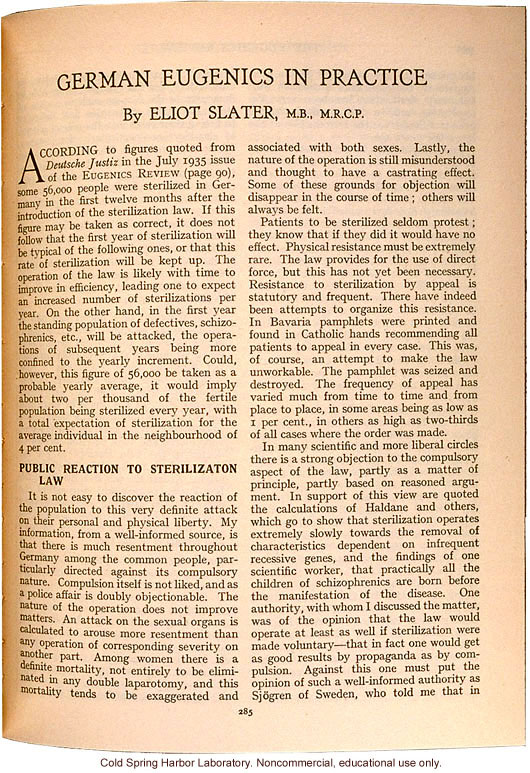 German Eugenics In Practice By Eliot Slater, M.B., M.R.C.P. According to figures quoted from [italics]Deutsche Justiz[end italics] in the July 1935 issue of the Eugenics Review (page 90), some 56,000 people were sterilized in Germany in the first twelve months after the introduction of the sterilization law. If this figure may be taken as correct, it does not follow that the first year of sterilization will be typical of the following ones, or that this rate of sterilization will be kept up. The operation of the law is likely with time to improve in efficiency, leading one to expect an increased number of sterilizations per year. On the other hand, in the first year the standing population of defectives, schizophrenics, etc., will be attacked, the operations of subsequent years being more confined to the early increment. Could, however, this figure of 56,000 be taken as a probable yearly average, it would imply about two per thousand of the fertile population being sterilized every year, with a total expectation of sterilization for the average individual in the neighbourhood of 4 per cent. Public Reaction to Sterilization Law It is not easy to discover the reaction of the population to this very definite attack on their personal and physical liberty. My information, from a well-informed source, is that there is much resentment throughout Germany among the common people, particularly directed against its compulsory nature. Compulsion itself is not liked, and as a police affair is doubly objectionable. The nature of the operation does not improve matters. An attack on the sexual organs is calculated to arouse more resentment than any operation of corresponding severity on another part. Among women there is a definite mortality, not entirely to be eliminated in any double laparotomy, and this mortality tends to be exaggerated and associated with both sexes. Lastly, the nature of the operation is still misunderstood and thought to have a castrating effect. Some of these grounds for objection will disappear in the course of time; others will always be felt. Patients to be sterilized seldom protest; they know that if they did it would have no effect. Physical resistance must be extremely rare. The law provides for the use of direct force, but this has not yet been necessary. Resistance to sterilization by appeal is statutory and frequent. There have indeed been attempts to organize this resistance. In Bavaria pamphlets were printed and found in Catholic hands recommending all patients to appeal in every case. This was, of course, an attempt to make the law unworkable. The pamphlet was seized and destroyed. The frequency of appeal has varied much from time to time and from place to place, in some areas being as low as 1 per cent., in others as high as two-thirds of all cases where the order was made. In many scientific and more liberal circles there is a strong objection to the compulsory aspect of the law, partly as a matter of principle, partly based on reasoned argument. In support of this view are quoted the calculations of Haldane and others, which go to show that sterilization operates extremely slowly towards the removal of characteristics dependent on the infrequent recessive genes, and the findings of one scientific worker, that practically all the children of schizophrenics are born before the manifestation of the disease. One authority, with whom I discussed the matter, was of the opinion that the law would operate at least as well if sterilization were made voluntary - that in fact one would get as good results by propaganda as by compulsion. Against this one must put the opinion of such a well-informed authority as Sjogren of Sweden, who told me that in 285 [end]
Copyright 1999-2004: Cold Spring Harbor Laboratory; American Philosophical Society; Truman State University; Rockefeller Archive Center/Rockefeller University; University of Albany, State University of New York; National Park Service, Statue of Liberty National Monument; University College, London; International Center of Photography; Archiv zur Geschichte der Max-Planck-Gesellschaft, Berlin-Dahlem; and Special Collections, University of Tennessee, Knoxville.
The images and text in this Archive are solely for educational and scholarly uses. The materials may be used in digital or print form in reports, research, and other projects that are not offered for sale. Materials in this archive may not be used in digital or print form by organizations or commercial concerns, except with express permission.