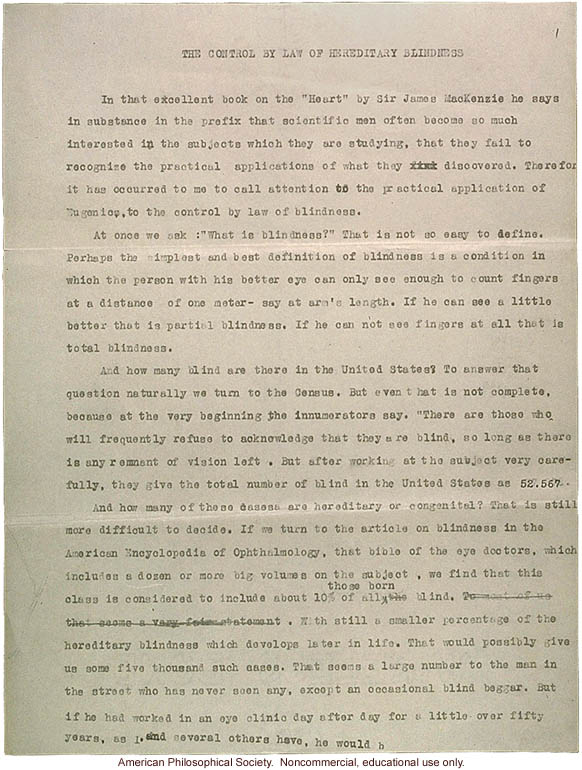 1 The Control by Law of Hereditary Blindness In that excellent book on the "Heart" by Sir James MacKenzie he says in substance in the prefix that scientific men often become so much interested in the subjects which they are studying, that they fail to recognize the practical application of what they [crossed out] discovered. Therefore it has occurred to me to call attention to the practical application of Eugenics, to the control by law of blindness. At once we ask: "What is blindness?" That is not so easy to define. Perhaps the simplest and best definition of blindness is a condition in which the person with his better eye can only see enough to count fingers at a distance of one meter - say at arm's length. If he can see a little better that is partial blindness. If he can not see fingers at all that is total blindness. And how many blind are there in the United States? To answer that question naturally we turn to the Census. But even that is not complete, because at the very beginning the innumerators say, "There are those who will frequently refuse to acknowledge that they are blind, so long as there is any remnant of vision left. But after working at the subject very carefully, they give the total number of blind in the United States as 52,567. And how many of these cases are hereditary or congenital? That is still more difficult to decide. If we turn to the article on blindness in the American Encyclopedia of Ophthalmology, that bible of the eye doctors, which includes a dozen or more big volumes on the subject, we find that this class is considered to include about 10[per cent] of all those born blind. [crossed out] With still a smaller percentage of the hereditary blindness which develops later in life. That would possibly give us some five thousand such cases. That seems a larger number to the man in the street who has never seen any, except an occasional blind beggar. But if he had worked in an eye clinic day after day for a little over fifty years, as I, and several others have, he would b
Copyright 1999-2004: Cold Spring Harbor Laboratory; American Philosophical Society; Truman State University; Rockefeller Archive Center/Rockefeller University; University of Albany, State University of New York; National Park Service, Statue of Liberty National Monument; University College, London; International Center of Photography; Archiv zur Geschichte der Max-Planck-Gesellschaft, Berlin-Dahlem; and Special Collections, University of Tennessee, Knoxville.
The images and text in this Archive are solely for educational and scholarly uses. The materials may be used in digital or print form in reports, research, and other projects that are not offered for sale. Materials in this archive may not be used in digital or print form by organizations or commercial concerns, except with express permission.