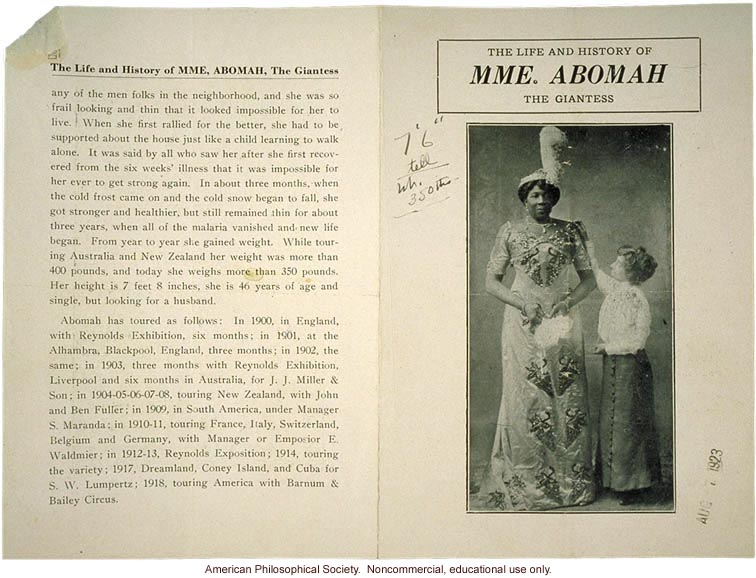 [page heading] The Life and History of MME, ABOMAH, The Giantess [end page heading] any of the men folks in the neighborhood, and she was so frail looking and thin that it looked impossible for her to live. When she first rallied for the better, she had to be supported about the house just like a child learning to walk alone. It was said by all who saw her after she first recovered from the six weeks' illness that it was impossible for her ever to get strong again. In about three months, when the cold frost came on and the cold snow began to fall, she got stronger and healthier, but still remained thin for about three years, when all of the malaria vanished and new life began. From year to year she gained weight. While touring Australia and New Zealand her weight was more than four hundred pounds and today she weighs more than three hundred and fifty pounds. Her height is seven feet eight inches, she is forty-six years of age and single, but looking for a husband. Abomah has toured as follows: In 1900, in England, with Reynolds Exhibition, six months; in 1901, at the Alhambra, Blackpool, England, three months; in 1902, the same; in 1903, three months with Reynolds Exhibition, Liverpool and six months in Australia, for J. J. Miller and Son; in 1904-05-06-07-08, touring New Zealand, with John and Ben Fuller; in 1909, in South America, under Manager S. Maranda; in 1910-11, touring France, Italy, Switzerland, Bellgium and Germany, with Manager or Emposier E. Waldmier; in 1912-13, Reynolds Exposition; 1914, touring the variety; 1917, Dreamland, Coney Island, and Cuba for S. W. Lumpertz; 1918, touring America with Barnum and Bailey Circus.[next page heading] THE LIFE AND HISTORY OF MME. ABOMAH THE GIANTESS [end next page heading]
Copyright 1999-2004: Cold Spring Harbor Laboratory; American Philosophical Society; Truman State University; Rockefeller Archive Center/Rockefeller University; University of Albany, State University of New York; National Park Service, Statue of Liberty National Monument; University College, London; International Center of Photography; Archiv zur Geschichte der Max-Planck-Gesellschaft, Berlin-Dahlem; and Special Collections, University of Tennessee, Knoxville.
The images and text in this Archive are solely for educational and scholarly uses. The materials may be used in digital or print form in reports, research, and other projects that are not offered for sale. Materials in this archive may not be used in digital or print form by organizations or commercial concerns, except with express permission.